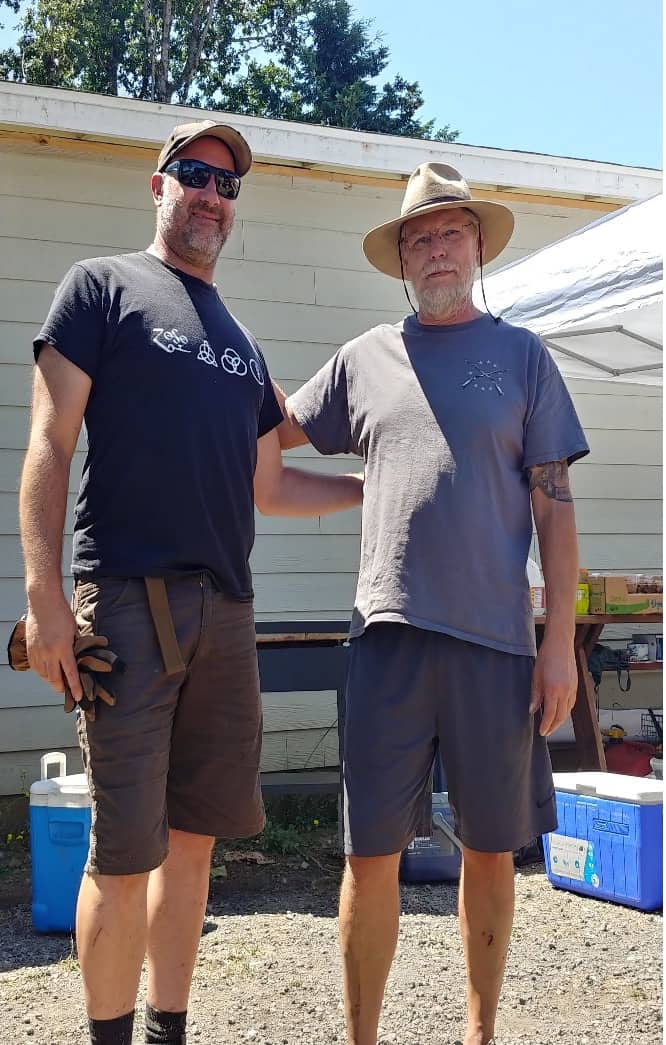 Chris Carpenter, Springfield B. O. and me

Dan Wilson was able to come out Monday and get our power and LPG trenches in, and Superior Electric came out Tuesday and installed the conduit. We now need to arrange the inspection by EPUD.

We had our exterior shear wall inspection on Tuesday, and I met Ray Hutchinson, Lane County Building Safety Specialist, at the site. We missed 18 nails in three areas, and still need to add (4) MSTA 36 straps. I have a call into the engineer to validate sheathing the inside of the portal framing with plywood as opposed to the straps, as we have a little left over and the straps are expensive.

McKenzie Roofing was able to come out on Saturday and get the roof dried in. Steve was able to help secure and coordinate the donation of about 80% of the roofing materials package from Roofline, leaving a balance of $2,347.00. I stopped by River Roofing to see if they may be in a position to bridge the gap in roofing materials. Vice President John Davey took some time to listen to part of our story and then after some discussion, he wrote us out a check for the full amount, so we now have the complete roofing package. A big thanks to McKenzie Roofing, River Roofing, and Roofline.

I received a call from Grace Smith, a KEZI Reporter who had heard about our situation and wanted to do a story on Tuesday, the day she called. I was not able to arrange it on Tuesday, but met at the site on Wednesday at 9 AM. She spent an hour and a half at the site interviewing us with great patients and the story aired on Thursday at 4, 5, and 6 PM. It was a very nicely done story with a good dose of intrigue! I did not know how she heard about our project, but suspect our great friends at Window World had something to do with it, as they were featured in the story as the donor of our windows, front door, and sliding glass door. Thanks to Grace, KEZI, and all the folks at Window World.

It did not take long to receive a call from Claudia of Elite Relocation Services, who seen us on television last night. Shawn Jones, the Owner and a veteran himself would like to help the Southmayds move into their new home this fall. This is something I had not considered, but the Southmayds still have most of their stuff in storage since the travesty befell them, so this turned out to be quite a benefit to them when it comes time to move in! Thanks to Claudia and Shawn.

Joe Hurd, owner of Hurd General Contracting returned my call on Tuesday, and took the time to meet me at the Southmayd job-site. He is going to try and help us with some of the exterior site preparation such as the decks, gravel fill in the garage and eventual slab, and general grading. It looks like we may need quite a bit of soil fill on the west side of the home in order to bring it up to grade and maintain complete ADA accessibility off the therapy room and to the planned swim spa. We may have an opportunity to obtain some soil from a local Creswell project, once they break ground shortly.

Lastly, I wanted to share that we had a work-party out at the Southmayd property on July 10th that was organized by Michele Linbarger and Jack Applegate of Northwest Code Professionals. We had folks from both ends of the state, to include Permit Specialist, Serena Locke and Heather Lathrop from Jackson County; Tiffany Little from Washington County; Chris Carpenter, Building Official of Springfield; Brian Overstake of MAE Engineering; and, a few others whom I did not get a chance to meet. Chris Smith from Dorman Construction also came out to help me envision what I should be thinking and planning to keep this project organized, and moving along at a reasonable pace.