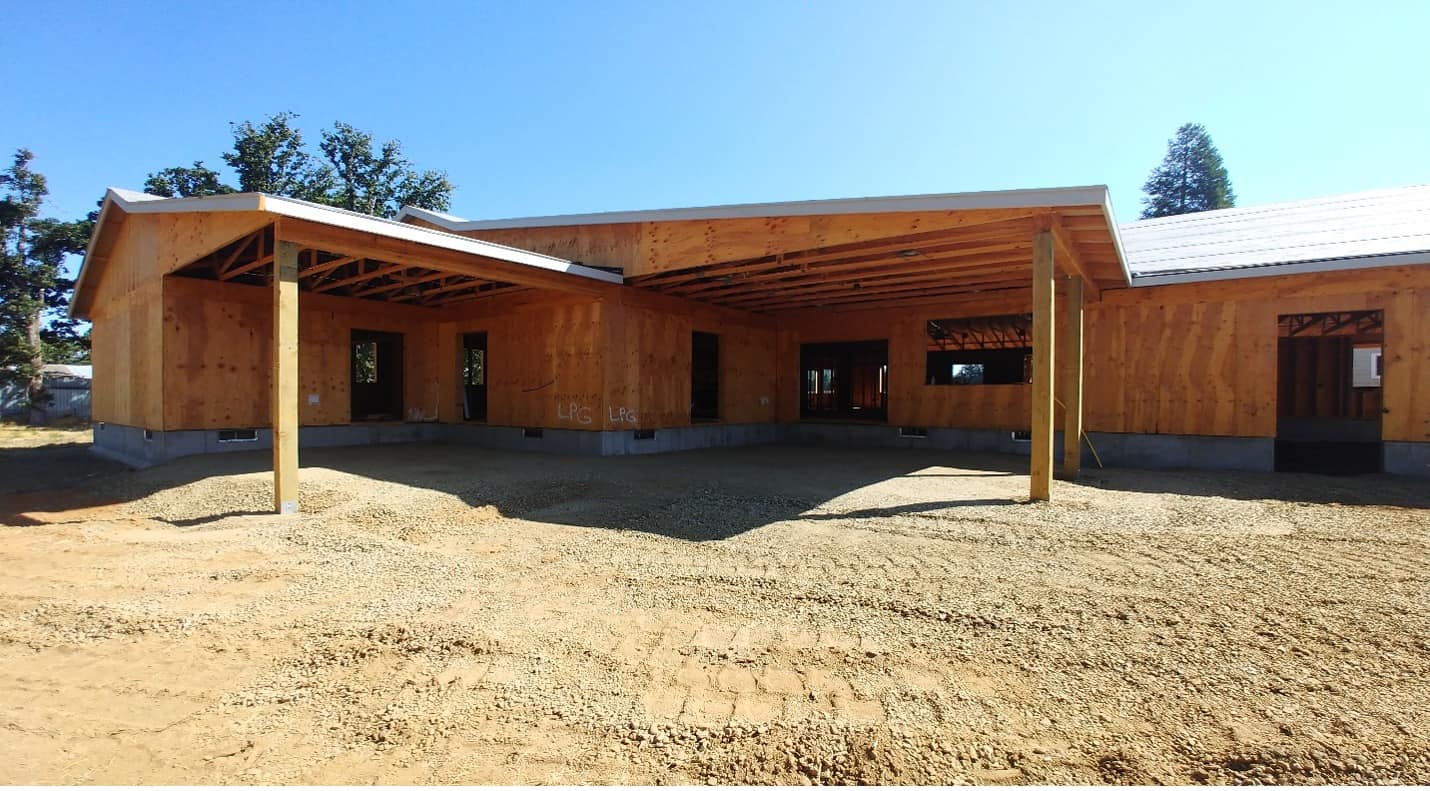 Melany Klemmer, City of Cottage Grove Building Inspector, who recently passed her state approved electrical training class, accompanied Ryan Bennett, City of Cottage Grove’s SR. Electrical Inspector, and I to the Southmayd project and performed the rough-in electrical inspection on behalf of Lane County. She did a superb job and found three minor corrections that we will watch for at final. Jason Everett Bush, Project Engineer for Harvey & Price, met Ray Hutchinson, Lane County Building Inspector at the SHB on Thursday for their rough-in NFPA fire suppression system inspection. It was our first approval without any conditions or corrections!

We should be calling in inspections for the framing and the rough plumbing and mechanical systems for early next week. Once approved, we are clear for wall & vault insulation.

Wade Stevens and I continue to haul sand and rock to the site to bring up the grades at the front & back porch as well as filling up almost 3 feet in the garage. Nolan Booher has helped us get the site cleaned up by leaving his dump trailer on site, so we could get all the wood construction debris recycled. He then brought it back and we filled it with the remaining construction debris & garbage. Nolan also walked me around the perimeter to figure out where we want downspouts to come down and directed to. We figured we need about 200 feet of pipe, 9 sanitary tees, about 15 coupling’s and 90 degree turns. That added up to almost $1,000, so I called Eric Bordeaux, Estimator & Project Manager for Twin Rivers Plumbing and they were gracious enough to buy it for us and have it delivered—hopefully by today so I can get it installed this weekend. A big thank you to Twin Rivers Plumbing and Eric.

Window World showed up with our window package on Tuesday. The front door should be delivered today or Monday, and Emerald Door & Glass has completed the four doors with half-lights for the rear of the home. They will store them until needed, and then will deliver them to the site. Boyd Rink, and his crew got over there and installed all the windows for us.

Travis Prine, Project Manager for Northwest Siding Contractors of Eugene gave me a final list of all the various flashings, nails, and other materials needed to complete the siding. He gave me a bid for $6,000 and indicated it would take approximately 10 to 12 days. The normal bid for a job like this would have been about $11,000. A big thank you to Travis! The siding is supposed to arrive at Square Deal today, hopefully. So, I will be reaching out to Huttig Building Products and Weatherly’s, for some of the products, and Steve with ANCO Fastener Sales has given us any and all the nails we need, including 2 boxes of stainless steel siding nails. I’m hoping to get the siding guys to work by next week.

I made a couple calls this week trying to sniff out some insulation and sheetrock. I called Knez on Franklin Boulevard and spoke with Donnie Reed who indicated that he does not know how much, but said they will help with some of the insulation products we need. I followed up our conversation the next day by stopping in to introduce myself. He walked me through their warehouse and indicated that he was ordering a bulk shipment today, could give us at least 15-17 bags of wall insulation, and depending on what he gets out of their Tigard store, he may have additional products soon.  Thank you Donnie!

The next opportunity revealed itself while doing inspections in Creswell. A big boom truck showed up and started unloading sheetrock. I asked the guy’s a little bit about their company and was soon provided a card for the Branch Manager, Richard Nelson, of L & W Supply. We soon talked, and he was going to review our website and see what he could do. He actually does a lot of business with the USG plant up in Rainer, Oregon, that I had previously gotten a commitment from, but have yet to hear back from, so he indicated he would reach out to them on our behalf as well. A big thanks to Richard for going to bat for us.

I wanted to clarify a couple things in regards to the weekly update’s. They are sent to the City Manager’s for Cottage Grove and Creswell where it is reviewed and posted on their respective websites. I then forward it to myself and blind copy it out to all the folks who have donated time, money, labor, or simply have requested to follow our progress. There is well over 200 people receiving it now, which does not include the people that view it on Operation Second Chance’s site. As I typically make contact with folks, I generally add them to the blind copy listing, so if there are some folks out there that would prefer to be removed from the weekly updates, please do not hesitate to call me.

Many thanks to all of you that continue to support this project, and follow the weekly updates. The entire Southmayd family and I cannot thank everyone enough.