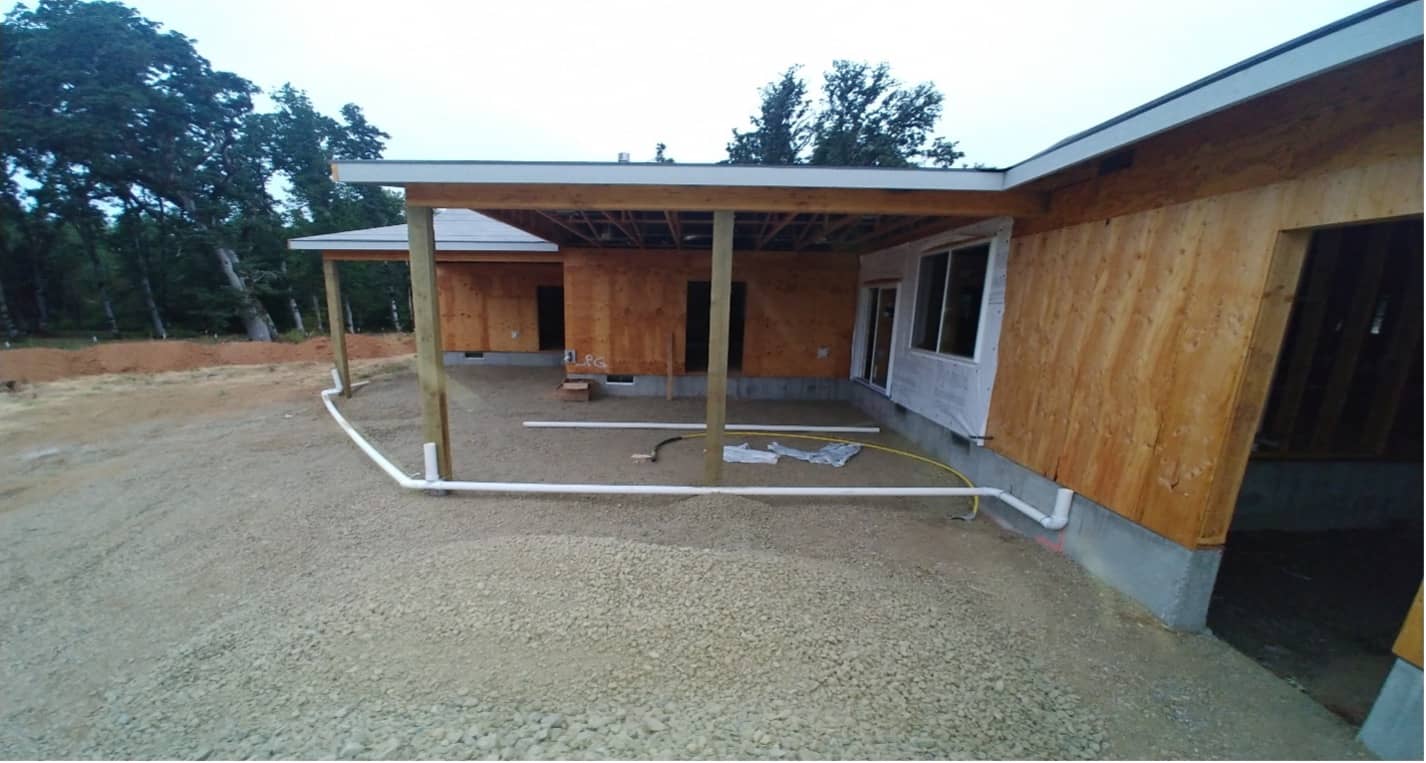 I received a call from the Rainer Division of United States Gypsum (USG). They would like to donate the sheetrock goods. They will email me confirmation to include the size of the five units as well as the weight, so when “I arrange the trucking required to pick it up”….. That poses a small dilemma, but I have had been in worse predicaments. So, I stopped by to see Donnie Reed again, Manager of the Springfield Knez plant. He indicated he gets trucks in all the time from them up at the Rainer USG plant so thinks he can arrange the trucking down to here, even if he has to take some of his order off. Thanks Donnie!

McKenzie Roofing sent one of their Top Dogs, Alvaro, out to the SHB Project this past Saturday, all by his lonesome, who took out a large swath of naked roof. It is a very nice-looking roof, and the Southmayds love it, and were extremely impressed at his workmanship.

Andy Halvorson, Owner of Halvorson Contracting, volunteered to set our underground rain drain pipes that Twin Rivers Plumbing donated and delivered. Him and one of his lead workers whipped it out in about three hours, so a big thanks to Andy and Jasem! Their fine work on the front porch can be seen below.

Our siding contractor had a conflict in scheduling, so will be starting our siding on October 5th, which will give me a little more time to secure all the remaining materials such as the Master Seal Caulking. It’s estimated we will need 65 tubes at roughly $10 a tube, so that got me on the phone to their Territorial Manager, Tyler Haswell, who assured me that he will run the request up the flag pole. Thanks to Tyler for anything he may be able to arrange for us.

Priority One Heating & Air Conditioning, Brothers Plumbing, Superior Electric, Harvey & Price, Ambassador Fireplaces, and Pacific Northwest Air, has all completed their rough-in work. We will be requesting the last inspections for framing, gas test, and the rough mechanical on Monday, so should be in the clear for Dale Wagoner, Owner & CEO of Insul 8 to get started on the walls & vault insulation. Dale met me on the job Monday to investigate what they will need to complete everything but the final blow-in. We thank Dale very much for taking care of this aspect of our project. The last thing that needs addressed prior to sheetrock, is the chimney for the woodstove. Jim Beck, Owner of the Stove Doctor, has us covered on that. The roofers will be back on the job Saturday finishing up.

Lastly, this week I would like to share that Ron & Mavis Bradsby, have again made a donation to our project in the amount of $5,000. This adds to the $30,000 they donated in the beginning. Again, as I’ve said before, if it wasn’t for Ron and his lovely wife, the sawmills, and the MEP contractors, we may have not had the confidence and depth to pull the trigger on the foundation.  Ron and Mavis are a huge part of the success of this operation, and we thank them so very much for being on our team and providing so much support!

We may not be on schedule, but that’s no problem because we have never really had a schedule other than getting them into the new home prior to this winter. With the rain drains in, piles of fill to be placed and compacted, and presumably placing the garage slab & porch slabs soon, it should leave us in a satisfactory position as we head into Fall.

“Every conversation is a pathway to a new relationship.”

Rob Fazio, On Point Advising. Rob lost his father during the 911 attacks while saving others from the terrorist attacks. We want to take a moment to thank all our first responders and military hero’s—both active and retired!

The above quote, I felt, is very applicable, and has provided guidance on our Journey of constructing the SHB Project.