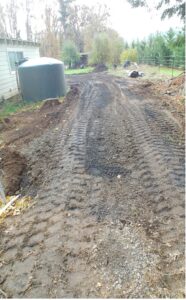 I heard back from Superior Electric. Most their guys were out hunting. Chris has a couple guys going by today to rewire the front door switches, which should be the last of the electrical work.

On Wednesday Insul 8 had one guy going out to the Southmayds, after wrapping some ducts on another job, to start our wall insulation. I have not been out there in a couple days, so don’t know how much he got done.

The siding crew has been out working on the house this week. They have the ceiling up on the rear porches, and a good portion of the siding in back. Luckily, the other half of our siding package came in to Square Deal and they delivered it the same day, so that kept the siders in materials just in time.

Brothers Plumbing installed our waterline on Tuesday, I think it was, and Nolan was right there to backfill and compact the gravel as he filled the trench the next day…. right after our Lane County Inspector, Mike Jensen gave us the verbal ok to cover. Nolan went on to regrade a portion of the driveway so that we can prepare the access for winter. We will need to get a concrete truck back there as far as possible when we get to the point of pouring the garage slab and other flatwork.

I have been looking up some leads for sheetrock installers. We have all the materials, so I’m hoping we can get some guys in there the week of November 8th. The Stove Doctor will be installing the attic portion of the woodstove chimney the Saturday before, which should be the last thing needing done prior to sheetrock.

Lastly, I have a project in Cottage Grove that Shaun Hyland, President of Hyland Construction, is involved in, and we got to talking about the Southmayd Home Build, so I gave him some of the documents I have put together. He emailed me today and indicated that he has some quartz and granite leftover from previous jobs that we could possibly use, and he also mentioned that he may also be able to buy some other products that we may need in the future. He also stated that he would like to donate cash to our project. This is certainly some great news, because as most of you know, I have been very stingy with the little cash reserve we have built up, so this will go along way in tying together the final finishes on the home. We thank Shaun so much for his help & support.