It was a pretty busy week for us. Dale Wagoner, owner of Insul 8 completed the insulation install, and we passed all four Lane County inspections which included under-floor insulation, wall & vault insulation, and a gas pressure test. This clears the way to start the sheetrock.

I met Ryan Magallanes, estimator for David Hartness Drywall on Monday who gave me some things to do before they could sheet rock, and that they planned on starting Tuesday morning. I needed to get the pocket door frames installed “yesterday”, and also needed to rent some big propane heaters, get plastic sheeting on the overhead doors, and re-frame a 42” door down to 36.” So, I went into panic mode, called Lee at Discount windows who was stuck in a Nevada airport, called around for a contractor who may be able to help on such short notice, and then started calling rental shops to get the heaters. It was looking like I might have to stop the sheet rockers, but them Lee at Discount Windows came through and had the pocket door frames delivered Thursday night! That was followed up with more good news by Shameron Stevenson, owner of Lucky Builders, returning my call. Shameron went to work rearranging some of his crew’s schedule so that he could send a couple guys out today, so we dodged another bullet. A huge thanks to Shameron and Lee, who know how to get things done!

In trying to locate the propane heaters, I ended up calling Sunbelt Rentals and speaking with Rebecca O’Neal, Equipment Rental Specialist. She was very helpful, and upon stopping in to pick them up, we started discussing the SHB project, which led to the fact that in 2016, Sunbelt Rentals, which has multiple stores in every state, went into partnership with the Gary Sinise Foundation (GSF). They provide all the tools and equipment to the contractors, at no cost, for each house the Foundation builds for our Veterans. I had attempted to get the GSF on board and went through the “contact us” process, but after 40 minutes, lost everything, so abandoned it, until now. They also donate a portion of rental proceeds to the GSF. Rebecca gave me some flyers on the partnership, so I plan on getting in touch with their corporate headquarters, to see if it could lead to something more than a couple propane heaters. Thank you so much Rebecca.

Brian Way, owner of Way to Go Construction delivered four, 12 yard loads of sand and two of 3/4- gravel, which should bring us very close to being able to start our flatwork. His big trucks had no problem going down the new driveway Wade and I constructed. Nolan Booher said he will come back out next week to spread and compact it down, so I will be getting ahold of some flatwork guys and revisiting with Knife River and River Bend.

We are now getting close to finish work on both the inside and outside. The painters are watching the weather and trying to get the exterior painted, so that the gutters can be installed. I have started sending group emails to coordinate timelines, colors, styles, and other options only the Southmayds can make in regards to cabinets, counters, floor coverings, and general finish options. 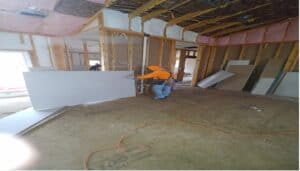