Glenn Has completed the delivery of the cabinets, however, he had depressing news that he will not be able to install them after all. He also indicated that our kitchen counters fell through and the contractor will not be able to help now. I immediately called Narelle, (just prior to me coming down with Covid) at McKenzie Stone & Tile last Thursday, and left her a message that the kitchen counters fell through. She called me back last night and told me not to worry, she has lots of ideas, and can most likely help! I had also put a call into Mike Blankenship, and cried out that I lost my cabinet installer and kitchen counters! I left a message to see if he had any thoughts or ideas. Mike texted me first thing this morning, Wednesday, June 22nd and stated they will be installing them next week, and not to worry. He is also helping coordinate the door hardware with Misty and I, and his supplier. Thanks to Mike & Narelle for their support in easing my mind. 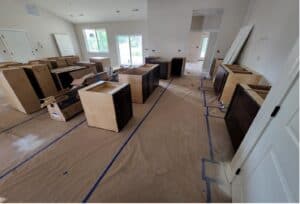 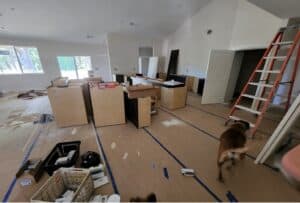 Glenn’s Kitchen cabinets are beautiful, he pays attention to the details, and Misty is very excited! I wish I had a picture of her existing kitchen. The 2×6 Doug Fir counters, the sloping, un-level floor, and the particle board cabinets that are literally falling away from the wall.

The bathroom cabinets are installed to the point of being able to install the counters, and Nick with McKenzie Stone & Tile is scheduled to be out to do the templates on June 28th and the actual installation on July 7th.

Superior Electric has guys out there this week installing the lights and trimming out their work. Misty was out inspecting her kitchen last night, and just happened to turn on the kitchen lights, and to her surprise, they all came on beautifully. She was not aware we we’re powered up, and it was a real pleasure to see the amazement & happiness in her and Jayson’s eyes!

Rueben with Bam Construction is tentatively scheduled to pour the last of the concrete for the back patio Monday at 2:30. It was a little tuff getting the concrete supplier and pumper on the same schedule. Paul with Smooth Move stated they would reserve slots all next week after 2:30, so hopefully we can get it poured.

Taylor’s Restaurant Equipment had something come up, and were not able to deliver the appliances. I assume Brent will be following up as soon as possible, which probably works better.

Andrew Dubbs, owner of Pacific Northwest Air, has tied in the second stage regulator, and Blue Star Gas is in the process of hooking up the main LPG tank & regulator. All that is left is the actual appliance hook-up for the gas fireplace, room heater, and kitchen range.

We received an expiration letter from Lane County last week indicating that are permits would expire in about 45 days unless we file for an extension, or call in another required inspection, which automatically reinstates the permits for another 180 days. I’m still working on getting the attic insulation blown in, which would resolve the expiration issue, once the County inspects it.

Jerry Luke, Creswell’s Code Enforcement Officer, whom some may remember was the gentleman that suggested to Jayson Southmayd to give me a call almost two years ago, has been very busy organizing all the documents, letters, emails, receipts, invoices, and all the other notes & hen scratches collected over the past two years. He has created a mailing list of all the folks that have been involved, supported us, or is interested in following this endeavor. This is invaluable in helping set-up the unveiling event in August. I have not heard from Dana in quite a while, and have been meaning to get her and Jerry in touch with each other. Jerry has a lot of experience in organizing events such as this.

Last Thursday, when I was hit by Covid, my personal computer also went down, making the last two weekly updates very difficult to keep track of and put to paper or communicate the project, so I apologize for the sporadic way it was written. My CPU should be ready today.

Below can be seen the handy-work of Nolan Booher, who must have snuck in there this past week and finished up the pantry and master bedroom closet organizers. Thank you Nolan Booher!