Rueben with Bam Construction and his crew poured the last of the concrete for the back patio Monday at 2:30. He had about 10 guys’ out there working the patio, and manipulating mud in some pretty warm conditions. Smooth Move Concrete Pumping was there doing their part, and Knife River delivered the two loads of 7 ½ yards of 3500 psi concrete at a discounted rate.

Mike Blankenship and his number one finish carpenter, Eric installed the kitchen cabinets first thing Monday morning, and boy do they look nice. Misty is in love! Mike also walked through the house with Misty & Jayson to determine all the interior & exterior door hardware, towel bars, shower curtains, and toilet paper dispensers. Mike has a connection for the hardware, so it is getting them ordered ASAP. Below, Misty is sharing some of her thoughts with me in front of her new kitchen! Eric also offered to complete the rest of the finish work to include barn doors for us, so think we are making up some lost time here at the very end. A huge thanks to Mike and Eric! 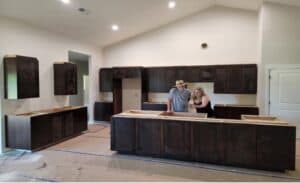 McKenzie Stone & Tile was there on Tuesday doing the counter templates, and will be back out on July 6th to install at least the bathroom counters. They are doing their best to see if they are able to help with the kitchen counters as well, but it was not in the original plan, so we may have to get creative in order to get the kitchen counters done. We thank McKenzie Stone & Tile for their gracious donation, the back-up depth given us, and the dedicated support Narelle and her team has provided to our project.

Brent, owner of Taylor’s Restaurant Equipment should be delivering & installing the kitchen appliances this week, or maybe by mid next week. We had a small scare that the refrigerator was too big for the cabinet, but Eric solved the issue for us.

Dan Cooper of DC Fine Homes has confirmed that they will donate $500.00 to the purchase of a flag pole for the property. David Daugherty, sent us his final architecturally stamped landscape & site plan. This shows where we plan on putting the flag pole, the dog training facility, the farm animal area, and all the various site amenities that the Southmayds have been dreaming of for many years. They can slowly work through all those details after we get them moved in to the new home.

Another dilemma was solved on Tuesday with the professional help of John from Rainbow Pump Company and Rich of Brothers Plumbing. Rich & I were trying to determine how to get the water to the new home, complete with all the water filters, pump alarms, pressure tank, and associated components. Should we try and move to the new garage, build a pump house, or figure something else out. With Johns input it was determined to leave it all in the old garage, and loop everything back around to the new house, which would also leave water service to the old house, as it will be difficult to do it on the day we try and move them in. Once moved in and finaled by Lane County, we can disconnect the old house. We then plan on trying to preserve a very small section of the existing old garage and turn it into a pump house, demolishing the rest. That’s the plan as of today.

Rich, said that the week of July 10th, he will send a crew out to complete the dog bath installation, connect the sinks and complete the fixtures installation, and do the final loop around in order to provide the final water supply. Should be ready for final plumbing inspections soon!

Tina Milligan, owner of Priority One Heating & Air-Conditioning called me and left a message that they could do the blow-in insulation for us, and I am under the assumption that I will need to come up with the material, so I stopped in at Marshal’s Heating Air Conditioning Insulation & Fireplaces to check on the regrind insulation that had been previously saved up for us, but they have not been getting as much lately and only have a few bags in storage. They will continue to save as much as possible, but it could take quite a while. Update! Tina and I had a chance to speak today, and she stated that they will have an insulation crew out there on July 13th, to do the final blow-in ceiling insulation, and that they are providing new blow-in insulation. Mark & Tina have been heavily involved in the Southmayd Home Build project, and we cannot thank them enough.

Ironically, a few friends and family have been harping on me to take some time for myself, maybe see a doctor, go fishing, or just get away for something. I have not really had a doctor in a long time, so made an appointment for a typical check-up. The doctor, as it turned out, is not doing any primary care, is helping out in the urgent care field, and is thinking about retirement. We briefly discussed me, then got off on discussing our Veterans, and as we continued down that road, I learned that he is the founder of the Veterans Legacy Camp Alma located at 21600 Siuslaw River Road out near Veneta! Doctor John Lebow invited me out to their next administrative meeting coming up on Saturday, July 10th so that I can meet the folks and tour the facility. They evidently have some construction projects going on out there, and we plan on putting our heads together to see what may develop……. God does work in mysterious ways!

Lastly, so far this week, myself & Dana, along with some guidance and help from Operation Second Chance, and Grunt Style are in the process of designing a commemorative T-Shirt. It gets a little difficult to acknowledge and have space for all the companies, individuals, and organizations that have contributed to the project, but we are slowly working through the details. Some of it is still being determined, but the one constant is installing everyone’s logos on the back of the shirt, so PLEASE, PLEASE if anyone has not gotten me their business logo, please do so as soon as possible. If you do not have one, we will install the name of their company somewhere on the back along with the various logos. This is very important to the Southmayds and myself, as we do NOT want to leave anyone out. I think there is well over 300 companies and individuals directly involved to date.

The Southmayds and myself wish everyone a happy & safe Fourth-of-July weekend.