I stopped in at McKenzie Stone & Tile on Thursday to check in with Narelle, but she was out at a conference; however, the rumor is, that they have something in the works in regards to the kitchen counters. In addition, Jayson was trying to do the tile work at the wood stove alcove, but it is proving much too difficult for him, physically. I think I found a retired tile setter that will come down and help him finish the work. In the next week or so. Jayson can be seen in the picture below arranging and re-arranging pieces in order to get the perfect look!

Above, is the alcove that the woodstove will be relocated to from the old house. The Stove Doctor has agreed to help us with that in the next few weeks, we are hoping.

I received an email last week from Joel Halberg, Director of Sales, for McKenzie Sew On. Dana must have contacted him and passed my rough T-Shirt ideas by him, as he had answers for everything! I did get permission to use Grunt Style and Operation Second Chance’s logos on our shirts, as long as they get to proof them, and I think we will go with an outline of the Southmayd House, complete with a flagpole. The outline will then be infilled, collage style, with all the names, companies, and organizations that have helped with this project. I know everyone is extremely busy right now, but if you folks could get me a rough estimate of how many and what size shirts you or your crews wear, I will do my best to account for us all. We should be able to get 300 shirts for around $2,500. I will know more when I get some feedback. 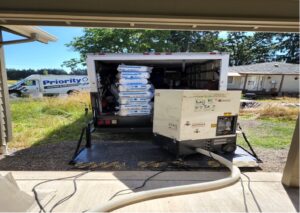 Taylor’s Restaurant Equipment delivered the appliances on Wednesday as well and would have installed them, but the “Priority One” boys were very busy in there, so left them in the garage for the time being. Brent told Misty they would come back and install them soon.

Priority One Heating & Cooling had four guy’s out preparing to install the R-60 blow-in attic insulation, which was done on Wednesday, and we should be having a Lane County Inspection today, that I fully expect to pass. Their trucks & equipment is in the picture below.

Saturday, August 13 is only four weeks away, so hopefully the mechanical, plumbing, electrical and fire suppression folks can get back in there to complete the finishing touches in the next couple weeks, so that we can get Elite Relocation Services out to help move their possessions over to the new home as soon as possible.