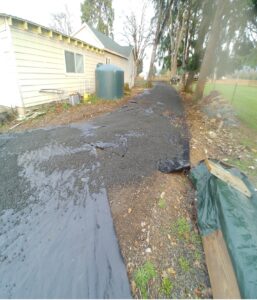 As mentioned in last week’s update, my three sheetrock companies fell through for various reasons; however, I then received a call from David Hartness, owner of Hartness Drywall, again, “straight outta Cottage Grove!” He had sounded excited about helping out on our project, new about the other three companies, and had mentioned to save some of the sheetrock work for him. When he called back, he assured me that they are committed to hanging, tapping, and texturing the whole job at no costs. He went on to say that he will work with Donnie at the local Knez warehouse, and that I need have no concerns, once I give him the okay. A big thanks to Hartness Drywall!

We’re still waiting on the LPG pipe to be relocated a few feet in the therapy room, and a little wall insulation to be installed. I know Dale, owner of Insul 8 has been extremely busy lately, as I see his crews all over the county. Once done I can get the insulation and gas test inspected by Lane County and be able to cut David’s Sheet rocking crew loose, hopefully making up a week or two.

I called Roberts Supply Company and started to discuss our SHB project with Keryl Halbert, Sales Manager, who surprisingly indicated she knew of our project as she had heard me on the Wake-Up Call with Rob Holloway a couple times. She was very helpful and discussed our needs with General Manager, Nick Smith, who immediately called me as he was heading up into the woods for a few hours. He indicated that if I needed the 120 feet of filter fabric sooner than later to simply go by and ask Keryl to have the yard crew cut it off the roll. We thank Keryl and Nick very much, as the expedited donation allowed Wade Stevens and I to get the south driveway compacted, the fabric laid down, and the first layer of quarry rock down Wednesday, helping prepare it for wet weather, as we need to get a concrete truck back there soon. Les with Meili has about six yards of quarry rock that is not needed, so is delivering it to the SHB site this morning.

Oregon lost another excellent contractor to a neighboring state, which makes close to ten that I know of. Brandon Huffman Construction, who helped out on the SHB, has gotten moved, settled in, and has landed his first big housing project. We thank him for continuing to follow our project and checking in with me. “Way to go Brandon!”