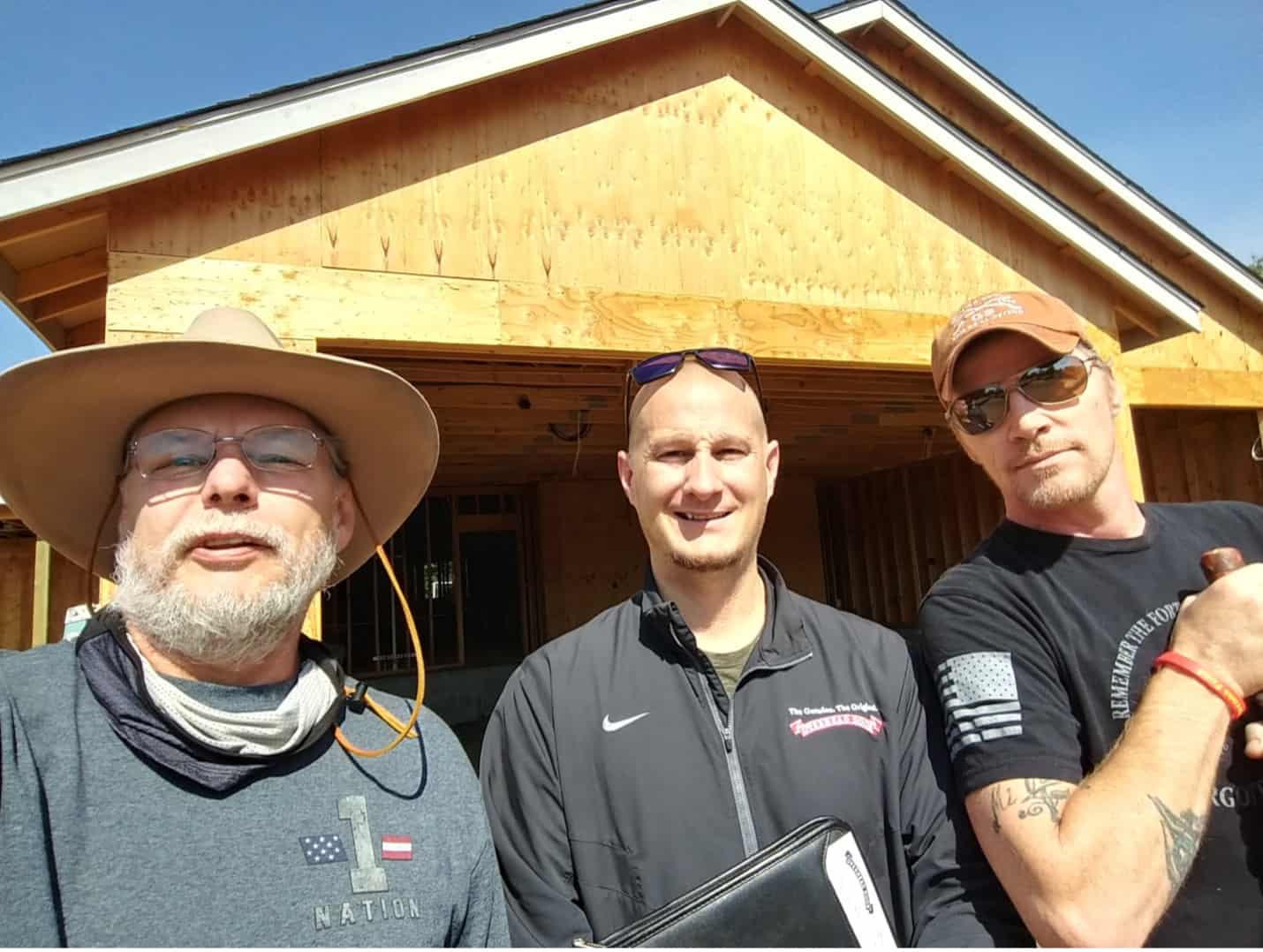 As you can see in the picture above of Paul Burrell, Doc, and I, that I generally do NOT do selfies!

We received confirmation that the USG (United States Gypsum) Plant in Rainer, Oregon is donating all the sheetrock, which includes 5 units, 226 pieces, and weighs about 14,000 pounds. I spoke with Dan Murphy, Outside Sales Representative for USG, who is taking the shipping dilemma out of my hands and will be working with Donnie Reed, Warehouse Manager for Knez Building Products on Franklin Boulevard. Donnie indicated he had it on his shelves and will deliver when we need it. Knez is also still trying to help out Dale Wagoner, Owner of Insul8 with some of the wall insulation. As indicated in last week’s update, Insul8 is donating and installing the walls, vaulted ceiling, and attic knee walls insulation. A big thank you to Insul 8, USG, and Knez for all their enthusiastic help with this amazing project!

Nathan Marple delivered about 100 yards of good-looking fill dirt on Wednesday that he has been hauling from the Creswell airport job. Nolan Booher said he can now continue on with the filling & compacting of the ¾ minus gravel at the back covered porch area. The soil was needed to help contain the gravel. I think we have hauled in approximately 220 yards of soil and about 145 yards of sand & gravel. We thank Nathan again for all his help with the SHB project.

My son, Jason Everett Bush, and I are leaving Saturday morning for Pittsburgh Pennsylvania to attend the International Code Council’s Annual Business Meeting. Jason Everett was awarded a scholarship to attend the ABM from ICC’s Military Families Program, and will be “shadowing” ICC’s Region II President, Russell Murphy of Montana. Jason will be attending all their Board Meetings, networking with the region II members, observing how they plan out their functions & duties, and having some nice lunches and dinners during his time with Russell. Jack Applegate, President and CEO of Northwest Code Professionals is there already as he is running for the ICC Board-of Directors position this year, so he is currently being grilled by his peers in lots of meetings and interviews. We will be returning on Wednesday, the 22nd. We will be voting for Jack!

I stopped by Copy Rite Printing store on Mohawk Boulevard Thursday to see if they may help with some printing of copies of the Building Safety Journal article, the article written by Gini Davis of the Creswell Chronicle back when the Southmayds were waiting for their house to be complete in 2019, a couple weekly updates, the original letter I wrote to gain the media’s attention, and the letter written on behalf of Grunt Style. Adam printed us 300 copies of the documents, for a total of 5100 copies. It would have normally been a good deal at $510.00; however, the mysterious lady in the office charged me $51.00, without the owner having to be contacted. All of us working on the Southmayd Home Build thanks them very much, as I plan on doing some serious fund raising in Pittsburg! Might have enough cash reserve soon to just go ahead and order up the work or materials regardless of the costs, which would greatly expedite our non-scheduled homes completion. Like Paul Told us yesterday, he will order our overhead doors this week, but don’t think they will be in until January, so it would sure simplify things.

I received a return phone call from Paul Burrell, President & COO of the Overhead Door Company of Eugene. Paul set up an appointment to measure the garage doors and meet the Southmayds on Thursday, and we spent about an hour discussing the project and the sad state of our country. Paul informed the Southmayds that he intends to donate the two overhead doors, complete with openers. We want Paul to know how much we appreciated his donation and that we really enjoyed his visit.

If anyone would like to visit the project site or meet the family, please know that I would be happy to meet them out there, introduce the Southmayd family, and take them on a tour of the project site. The existing house is quite interesting and unbelievable to investigate as well.

I need to check with Priority One Heating & Airconditioning as well as Pacific Northwest Air to make sure we get the framing, rough mechanical, and gas pressure test inspections called in, so that I can get the news to Dale at Insul 8, so that he can plan out the insulation install. We will then be ready for sheetrock. We still need to get the sheetrock mud, tape, corners, screws, and texture materials. I have a guy who may be able to install the sheetrock, but need to confirm it prior to announcing it to everyone but him.