Brett Reckamp, Co-Anchor of Portland’s Morning News on KXL FM 101, called me Monday morning to see how the Southmayd Home Build Project was going. Brett has been following our story all along and has been very diligent in helping us get the word out there. He aired the interview on Wednesday morning at 6:48, and a little after 7:00, I received a call from a gentleman from Beaverton named Steve. Steve simply indicated that he was a US Navy boy, heard our story on KXL 101, and wanted to send a donation. Brett recorded our interview which can be heard here: http://traffic.libsyn.com/beyondtheheadlines/bth_416.mp3

Brett also indicated that the interview will be airing on 8 of their ALPHA Media radio stations on Saturday & Sunday mornings in the Portland area. Steve is now following our story, and I want to thank both Steve and Brett Reckamp for their support and Steve’s service!

I took the wife out to dinner last night, got to talking about the Restaurant “Along Came Trudy” and how they we’re fined almost $10,000 for violations of the Covid-19 mandates, and so ended up there for an adult beverage…. To our surprise, Trudy was hosting a town-hall style fund-raiser for Darin Harbick who is running against current Oregon Senator, Ron Wyden. So, of course I took the opportunity to discuss the Southmayd Home Build Project with him as the event concluded. He seemed very interested, and accepted my invitation to tour the project, so it will certainly be very exciting to walk him around the project site and introduce him to the Southmayd family. 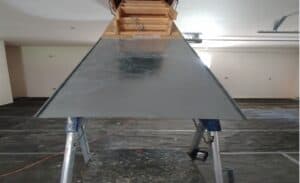 We also were introduced to Bill Ledford who is running for State Representative District 12 which includes the City of Coburg. Bill and I had a good conversation and he also seemed interested in touring the Southmayd Home Build site. He asked to be added to our weekly update list, so we are looking forward to showing him the construction site when the opportunity arises.Another little thing that that needed to get done prior to requesting a final inspection from Lane County is the drop downstairs plywood bottom. Garages must be separated from the residence portion of a home for fire safety reasons and having about a six square foot hole in the sheet rocked ceiling is a code violation, so Michael, a Coburg resident who happens to be adding on to his home, constructed a sheet metal covering that will slide over the plywood bottom to complete the integrity of the separation.  We want to thank Michael for his fine work, which can be seen in the pictures below. He also indicated that he is willing to construct more of these in case someone would like one for their project. Simply contact me and I will make the introductions.

Yours in Building Safety, “and” Guarding Our Veterans,